SmartRace can also be used for timing and lap counting of your analog slotracing track (e.g. Carrera Evolution, Carrera Go!!!, Ninco, Scalextric, SCX and many more). And it's even easier than you think - no additional sensors, no hardware changes. 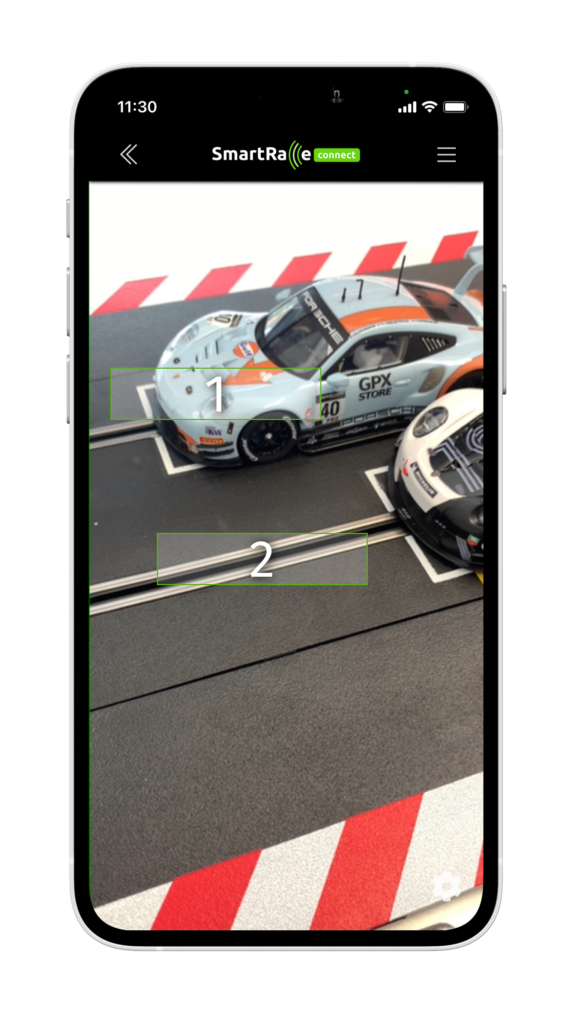 SmartRace can also be used for timing and lap counting of analog slotracing tracks. Just download SmartRace Connect to a smartphone or tablet, connect if to a device which runs SmartRace and start the sensor more. The smartphone camera should be directed to the track and automatically informs SmartRace if a car passes through. Simple, right?

Suitable for all kinds of non-digital race tracks

You don't need to change anything on your track in order to be able to use SmartRace.

Timing and lap counting for up to 6 lanes

Just add up to 6 hotspot areas in the sensor view and SmartRace will take care of the rest.

Use the power of SmartRace

Drivers, cars, tracks, lap records and many more features - all at your disposal.

Everyhing you need for nothing more than the cost of a good lunch.

Here is how it works

Using SmartRace for timing and lap counting at your analog slotracing track is very simple. Just place the device which runs SmartRace Connect at your track and have the camera facing the driving lanes. Add some hotspot areas to the view and place them using drag & drop. Done! Whenever a car passes through the camera view and hits one of the hotspots, a lap will be reported to SmartRace. All information is transferred to SmartRace via wifi.

Questions about the Analog Mode

Do you have any questions before diving deep into the adventure of timing and lap counting for your analog slotracing track with SmartRace? Here you’ll find answers. And if there is a question for which you don’t find an answer here, just email us at info [at] smartrace.de

I already own SmartRace. Do I have to buy it again to use it with my analog track?

No! If you already own SmartRace, you don’t need to buy it again to use the Analog Mode. You only need the add-on SmartRace Connect Server.

There can be false measurements when other things than a car pass the camera view or the lighting changes very much. This is why you need to keep the lighting stable and all cats and dogs in a different room. 🙂

Which apps do I need to use the Analog Mode?

How many lanes does the Analog Mode support?

You could measure up to 6 lanes. But please keep in mind that the device needs to be capable of processing all the data.

Do I have to use cars with different colors in order for the Analog Mode to work correctly?

No! SmartRace works with motion detection – it doens’t matter which color each car has. You can even use cars which are completely identical.

Something is not working as expected.

No worries! Please report issues or problems at support.smartrace.de or by mailing to info [at] smartrace.de. And if you’re not happy at all, please get in touch anyways, we’ll find a solution. Guaranteed!

How does the Analog Mode distinguish the cars from one another?

On non-digitale slot racing tracks, the cars always stay in the same lane, which means that SmartRace will count a lap whenever “something” passes the hotspot area on each lane. To avoid false measurements, you can configure the hotspot sensitivity.

Can I use all features of SmartRace in Analog Mode?

No. You will only be able to use features which don’t require a pit lane and/or a connection to the Carrera Digital Control Unit, which means that neither weather, penalties, damages, virtual safety car or the tuning section can be used in Analog Mode.

SmartRace can be used for timing and lap counting of analog slot racing tracks, too. Just download SmartRace Connect to a smartphone or tablet, connect if to a device which runs SmartRace and start the sensor more. The smartphone camera should be directed to the track and automatically informs SmartRace if a car passes through.

What is an analog slot racing track?

Analog slot racing tracks are electrical slot based race tracks where two or more cars run against each other on different lanes. Known manufacturers of analog slot car racing sets and tracks are Carrera (Carrera Evolution, Carrera Go!!!, Carrera Exklusiv, Carrera Universal), Ninco, Scalextric, Hornby, SCX and many more. People will often use mechanical lap counters which work by putting a piece into the lane which is then hit or moved by the car passing through.

Software and apps for lap counting and lap timing

The more convenient lap timer and lap counter method is to use apps for it. SmartRace is available for iOS, macOS and Android and works on a large variety of devices (e.g. iPhone, iPad, MacBook, MacBook Pro, Mac Mini, MacBook Air and on a large number of Android devices). Using SmartRace is pretty simple and even very simple for non-technical users.