Coming soon: a separate version of SmartRace for Carrera Go!!! Plus

For the small racers, Carrera provides a system called “Carrera Go!!! Plus”, which is basically an analogue track which can be connected to a tablet/smartphone via bluetooth. While the hardware is kind of nice, the software seems to bother many people who 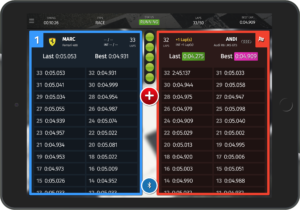 express their anger by giving very bad reviews on the stores (even worse than for the go plus’s app big brother for Carrera Digital, called the Carrera Race App. Long story short: I want to bring an alternative app to the market, which will be a separate version of SmartRace for Carrera Go!!! Plus. I already started on this and hope I will be able to release the app within the next 1-2 months.

Very shortly I will bring a website online which provides some more information on the app, it’s features and the progress. Stay tuned!

Commercial Use
SmartRace for Business

All videos, images and graphics used are the property of SmartRace unless otherwise stated. Further use for private or commercial purposes is not permitted without express permission.

SmartRace is a software for Mac, tablets and smartphones and is used for timing Carrera Digital tracks in 1:32 and 1:24 scale and via the Analogue mode also for analogue tracks (e.g. Carrera Evolution, Carrera Exclusiv, Carrera Go!!!, Ninco, Scalextric or others). SmartRace either connects to the Carrera AppConnect adapter via Bluetooth or takes the measurement in analogue mode via the camera of a smartphone connected via SmartRace Connect.

Carrera®, Carrera Digital® and Carrera AppConnect® are registered trademarks of Carrera Toys GmbH. SmartRace is not an official Carrera product and is in no way associated with or dependent on Carrera Toys GmbH.