Please note: this feature is part of a chargeable add-on which can be purchased from within the app. To purchase it, open the “add-ons” dialog from the main menu in SmartRace. If you would like to know more about in-app purchases in SmartRace, please look here.

You can have your own championships in SmartRace. To create and manage championships, open the “championships” dialog from the main menu in SmartRace. For each championship that you create, you can define of how many races it should consist and which point system should be used. You can change those settings even after the championship has already been started – the points will be re-calculated automatically and instantly.

To have a championship race, just do a regular race. After you finished it, there is a button “save as championship” race. Click it to see a list of running championships. Pick the one you would like this race being counted to and confirm your selection. That’s it! 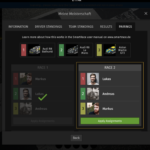 If you create you championship using the “exchange” mode, all drivers have to drive each car at least once (depending on how many races you set as a goal for the championship). To accomplish this, you can add not only a list of drivers to the championship (similar to mode “default”), but also a list of cars which should be driven. From the selected drivers and cars, SmartRace will automatically create a pairing for each race to make sure that all drivers drive all cars at least once. To view the pairings, select the tab “Pairings” from the championship detail view. 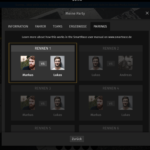 Using the “Party” mode, SmartRace will automatically create a list of fixtures from the selected drivers for the current championship. This way each driver has to race against each other driver at least once (depending on how many races you set as a goal for the championship). Every race will only have two drivers in it.

The driver who collected the most points will be the champion. In this mode the automatic assignment button is not available, because there is no guideline on which car has to be used.

Teams can be added and managed from the “teams” item in the SmartRace main menu. To assign a driver to a team, edit this drivers profile and pick the team from the selection. If a driver who takes part in a championship is part of a team, this teams points will be calculated automatically on the “team standings” tab on this championships detail view. 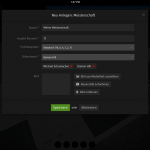 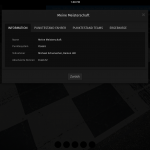 Detail view of a championship 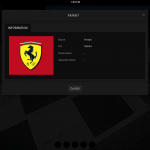 Detail view of a team 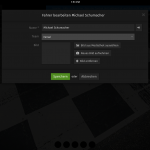 Assigning a driver to a team

These cookies are necessary for this website to work properly. They can't be disabled and don't contain any personal data.

We use these cookies to track your visit for statistical reasons.