In the support center you will find helpful links and articles about common questions & problems around SmartRace.

Please note: this feature is part of a chargeable add-on which can be purchased from within the app. To purchase it, open the “add-ons” dialog from the main menu in SmartRace. If you would like to know more about in-app purchases in SmartRace, please look here. 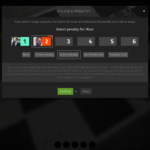 If a driver causes a race interruption (e.g. by jump starting, pushing other drivers off the track, crashing), you may wish to assign a penalty to the involved drivers. For this, the button “PENALTY” on the bottom right of the race screen can be used to open a penalty dialog, from witch you may select the drivers and penalties you’d like to assign.

For each driver, a penalty can be selected. These are the possible types of penalties:

As soon as a driver has been punished with a time penalty, a red bar will appear on the time table for this driver which contains the amount of time they have to serve. As soon as they enter the pits to serve the penalty, the bar will start flashing. If the penalty has been served completely, the bar will disappear.Anker

Automatic penalty for speeding in the pit lane

In addition to doing it manually, drivers can also be penalized automatically if they drive too fast in the pit lane. For this, you just need to add a minimum time delta to the current tracks settings in the track database. This delta is the sum of both the lap time before entering the pits and the one after leaving the pits. When starting a race, you can then configure if and how drivers should be punished when undercutting this delta.

Example: let’s assume a fast lap time on your track would be 10 seconds. In that case you could enter a delta of 20 seconds for this track in the track database (which would be the sum of two fast lap times). You start a race and configure that drivers should be penalized with a 5 second time penalty for speeding in the pit lane. During the race, driver 1 enters the pits. The lap time for driver 1 on his in lap was 9 seconds, he stays in the pits for 5 seconds and after he left the pits, he does a lap time of 10 seconds. Now the delta for driver 1 would be 10 + 9 = 19 seconds, which is 1 second below the delta and would therefore cause a 5 second penalty for them. Please note that the pure pit stop time (5 seconds in this case) is automatically subtracted from the delta, which means that it doesn’t matter how long a driver is really standing in the pits.

Commercial Use
SmartRace for Business

All videos, images and graphics used are the property of SmartRace unless otherwise stated. Further use for private or commercial purposes is not permitted without permission. Pictures of the ADAC TotalEnergies 24h Nürburgring courtesy of ADAC Nordrhein e.V.

SmartRace is a software for Mac, tablets and smartphones and is used for timing Carrera Digital tracks in 1:32 and 1:24 scale and via the Analogue mode also for analogue tracks (e.g. Carrera Evolution, Carrera Exclusiv, Carrera Go!!!, Ninco, Scalextric or others). SmartRace either connects to the Carrera AppConnect adapter via Bluetooth or takes the measurement in analogue mode via the camera of a smartphone connected via SmartRace Connect.

Carrera®, Carrera Digital® and Carrera AppConnect® are registered trademarks of Carrera Toys GmbH. SmartRace is not an official Carrera product and is in no way associated with or dependent on Carrera Toys GmbH.